HOPES – Higher and Further Education Opportunities and Perspectives for Syrians 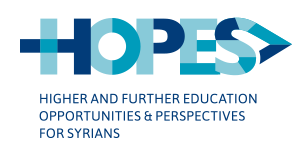 Due to the conflict in Syria, more than seven million Syrians have been displaced internally and around five million have fled the country, finding refuge in neighbouring countries. As a result of the enduring crisis, the higher education systems in the host countries have been heavily affected and a situation has arisen where only a small fraction of the vulnerable young refugees are currently enrolled in a university programme.

HOPES (Higher and Further Education Opportunities and Perspectives for Syrians) is a €12 million project, funded by the European Union’s Regional Trust Fund in response to the Syrian Crisis, ‘the Madad Fund’ and implemented by the German Academic Exchange Service (DAAD) together with the British Council, Campus France and Nuffic.

It aims at improving prospects for young Syrians and contributing to the preparation of the post-crisis reconstruction of Syria. The project seeks to provide better access to quality further and higher education opportunities for refugees of post-secondary-age from Syria as well as young people in the host communities affected by the high influx of refugees in Egypt, Iraq, Jordan, Lebanon and Turkey.